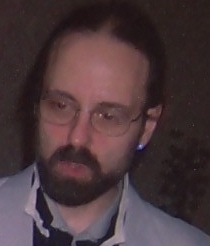 Today on 13 Questions we have D.C. Petterson. D. C. Petterson is a software consultant in a quintessentially Midwestern American city. He plays keyboards and guitar, preferring a 12-string Takemine. At present, he’s got two dogs, two cats, two children, two grandchildren, one wife, a gecko and a bearded dragon. His fiction tends toward dark fantasy and sci-fi, sometimes with a whimsically gritty emphasis. He’s also a political blogger, and knows far too much about esoteric religious niches. He has seen one total solar eclipse, and no longer smokes cigars.

Pretty much the same thing that drives me to eat or sleep or have sex. I can’t not-write any more than I can choose not to breathe for more than a very limited period of time.

If I didn’t write, the need would leak out in less social ways. See, humans are bundles of instinctual hungers. The need to create is one of them. Instinct compels us to do the most outrageous things, showing itself in different ways from one person to the next. It must have an outlet. I create stories rather than making things that are less socially acceptable — say, roadside bombs or default credit swaps.

I mostly just write what I see, after toning it down a little.

I want to tell stories that move readers, shaking where they live. Sometimes that means shining a flashlight into corners of the cellar, and sometimes it means breaking light bulbs to let the dark leak in. The point is to touch something that you wouldn’t normally want to touch, or perhaps to have touched.

In my stories, I want to talk about the things that make us human. We can’t escape the pre-physical essence of which we’re formed. It comes from a substrate than is far more real than the waking world. To paraphrase Will Shakespeare, it is such dreams as stuff is made on. I try to wrap some words around those things.

Whitley Strieber and Ray Bradbury, hands down. Strieber makes my skin crawl into the next county, and Bradbury’s mastery of poetic language makes a stark contrast with the fear he can evoke. It’s impossible not to like Stephen King, and probably unnecessary to say more about him.

Arthur C. Clark is not a horror writer, but no one does O. Henry-type endings better than him, not even O. Henry. It’s a valuable skill to watch as executed by a black belt. His short story, “The Nine Billion Names of God,” still gives me chills.

Also not horror, not even fiction, but anyone who wants to learn anything about storytelling has to read Joseph Campbell.

I assume you mean, other than mine, right?

How I view horror may include works not normally included in that category. I love the classics. I recommend Strieber’s Communion, Shelly’s Frankenstein, everything by Lovecraft, Orwell’s Nineteen Eighty Four, Bradbury’s Martian Chronicles and The Halloween Tree, Conan Doyle’s Hound of the Baskervilles.

I love technology, but I also love the physicality of a book. One problem with ebooks is that you don’t own them as much as you think you do – you’re dependent upon the vendor to maintain your library for you. A hundred years from now, no one will be able to read an ebook discovered in a great-grandparent’s attic. The thing won’t work, and blowing the dust of it won’t help.

On the other hand, an e-reader lets you put thousands of books into your pocket, which is great for voracious readers, or for re-reading a favourite novel. The cost of each book is less, which means readers might be more willing to take a chance on an author they don’t know.

It’s a question of convenience vs. visceral sensation. It all depends on how much one stays in one’s head.

I normally prefer physical books, and I own a couple thousand of them. I’m buying more electronic ones these days.

I can get drawn in by a snappy synopsis that hooks me on the story. I like tales that can operate on three levels at once – a good plot; some larger social or philosophical questions; but most importantly, interesting characters facing extraordinary challenges.

That would probably be Michael Valentine Smith, from Heinlein’s Stranger in a Strange Land. It’s not just the character himself, but the audacity of the story, seeing as it was published in 1961. The novel set the mood for the next two decades, particularly here in the States.

Usually, I’ll plot out a story in some detail. As I write, there are invariably shiny objects I’ll find along the road, some of which need to be explored more deeply, some which can be set aside for another day. It isn’t unusual for me, after finishing a polishing a draft, that I’ll realize there needs to be expansion to let a thought or a subplot fully play out. In a previous novel, A Melancholy Humour, I wound up adding four minor characters, one of whom developed into a favourite of mine. Unfortunately, he died halfway through. Occupational hazard for a minor character in a dark fantasy.

I can’t reasonably understand the course of a story’s arc unless I know where it’s going. I don’t know how much of the lush detail in a given scene to tell, unless I have some idea of what will be important later. That doesn’t mean a story can’t change in the process of the telling. I need to have a goal, though, or I get lost wandering among side-roads that don’t get me anywhere.

Having said that I plot things out, it’s also true that I listen to the people whose lives I’m chronicling. It isn’t so much that they “take on” a life of their own. They already have that. I just watch what they do and write it down. The process of plotting a story beforehand isn’t so much working out the plot kinks, as it is deciding where in the lives of my protagonists I’m going to start and end the portion I’ll relate to my readers, and how much to tell about what’s going on around them.

One phenomenon I’ll often notice is that a character will do or say something offhandedly, just a throwaway line or casual glance. I’ll discover fifty pages later that the apparent random comment has become the key to some plot twist I hadn’t known about, the single vital detail that will resolve a conflict or point at the way out of the pit. If a writer doesn’t listen to the people in the story, those keys will be missed.

A song will often give me the mood and feel for what I want to do with a story, but I don’t; often listen to music when I write. That doesn’t mean I need silence. There are usually things going on around me. I suppose I’m one of those people who needs the murmur of background noise, but I normally blank it out.

Let me answer that this way. Writers are always told to “write what you know.” I’d put it differently: “write what you love.” Once one has the mechanics of sentence structure and spelling and storytelling techniques, effective writing is about passion – recognizing it, expressing it, being honest about it, and evoking it in the readers. We naturally learn about the things we care about. If you write what you love, then you’ll write what you know, as a matter of course.

Most of my stories have grown out of lifelong interests and obsessions. I knew the subject matter the way a sports enthusiast knows the stats. This doesn’t mean I know every detail needed for a given story, particularly as regards incidentals of the setting and times. Those are things I have to learn as I go.

For example, my latest novel, Lupa Bella, is set in Sicily in the early 1960s. A few hours spent on Google Earth helped immensely with the

surroundings. I looked into the history of the times as well. The political environment of the day, and the still-present impact of the Second World War, fleshed out the story in vital ways, lending themes and images and plot points without which the novel would have been much poorer.

But I don’t view that as “research” so much as learning more about the lives of the people I’m describing. It’s more like having a conversation with these folks at a dinner party – “Where did you grow up? What’s it like there? What creatures live in the woods around you?” That’s a lot more fun than “research.”

It is important for a writer to know more about such things than the story reveals to the readers. That will invariably give the story a sense of existing as part of a larger world, something like what we usually call the “real” world.

Okay, it’s like this. I’m pretty anti-social. I have a Twitter account, and a Facebook page, and a blog page. I’ll usually do a spasm of tweets every few weeks, and write a blog a few times a year, and visit Facebook mostly to see what my relatives are doing.

My problem is that I have a hard time believing anyone would be interested in what sort of juice I had with breakfast, or what TV shows I watch. The things I want to write about usually end up as stories which don’t fit into tweets and are far too long for a Facebook entry or a blog post. I also don’t approve of Facebook’s “privacy” policies.

My editor is on a mission to civilize me, like one of those kids who was raised by wolves and needs to learn to interact with the human world. (The analogy is more apt than it might sound, judging from the themes in my books…) I’m being encouraged to use social media more.

So follow me on Twitter @dcpetterson or visit my blog http://dcpetterson.blogspot.com/ to track how well my process of joining human society is going.

It always takes longer than I expect. I struggle over almost every word, then feel drained after each scene. I go back and revise, usually multiple times, a process that normally begins halfway through the first draft. More often than not, I’ll wind up expanding the story, adding the bits I missed the first time through, punching up a scene to wring more passion from it. Then, if I sell the tale, most of those steps are repeated with an editor. The whole thing is exhausting, particularly since I strive to make the prose sound effortless.

I don’t mind any of that. In fact, that’s the part I like. But after a while, the story is finished, goes off to the presses (physical or virtual), and I leave that particular world. I don’t get to poke at the story and improve it some more. I have to leave some of those people behind, and I’ve always fallen in love with many of them.

That’s the part I hate.

2 thoughts on “13 Questions with DC Petterson”