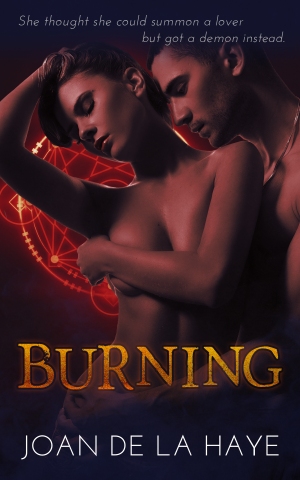 Marcie Grove is a lonely witch. After a full moon ritual, she decides to do something about the abysmal state of her love life. Making use of a powerful spell to cure her sad state of affairs, she puts her own life, as well as her coven, in danger when her apparent success brings forth a dark power with explosive and deadly results.

And here’s an excerpt for your reading pleasure:

The rite was ended.

The moon hung on a black blanket of sky, peppered by hundreds of bright stars that were not visible in the city. The air felt electric against their skin as the naked coven filed out of the sacred circle and congregated inside the warm farmhouse situated north of Pretoria. The coven was always more energised and more connected after a ritual. They believed that these rituals made them more psychically connected and in tune with each other’s minds and bodies. The sound of beating drums drifted across the fields from the shanty town located two farms away. Once they’d put their clothes back on, they would add the sounds of their own drumming circle to those of the townships’.

The full moon ritual had been conducted to attract wealth. They’d each empowered a two Rand coin and tied a green piece of ribbon around it. The coin would be stored in their purses with all their other coins, but would never be given as legal tender. It was a relatively simple ritual, although one they’d never done before and like most of their spells was unlikely to actually work. They’d each held the coin in their hands and chanted. The chant got louder and louder until they were shouting it out and their voices were hoarse. Their shouting had probably been heard by the inhabitants of the informal settlement.

They were thirteen women – a full coven. They were, what some would call, a Dianic coven. But they were, in truth, a bunch of kitchen witches who practised most of their spell-craft on the stove top. They had been practising together for close on three years now, and there wasn’t anything they didn’t know about each other. They were so in-tune with one another that their periods had synchronised. Over the years they’d seen each other through breakups, marriages, childbirth, extra-marital affairs, and even a divorce or two. They were a close-knit family that would do anything for each other, even kill or dispose of a body. But that particular bond had never actually been tested.

As Marcie put the coin in her purse, she couldn’t help but wonder if these small rituals were all there was to being a witch. There had to be more than just sympathetic magic. Tarot readings, candle spells, their monthly rituals, it all seemed so mundane. Dabbling had gotten tiresome. She wanted to feel the presence of great power. She wanted to experience the real thing.

She’d had glimpses of it over the years.

You couldn’t have a dinner party with a coven of witches without a ghost or two showing up and having their translucent figures floating around the room, trying to communicate. At first, they’d used an Ouija board, but then after a rather strange event involving a previous tenant of the farmhouse, they’d discovered they no longer needed the board.

Sandra was a medium – the real deal. She’d been talking to what she’d always thought of as imaginary friends since her sixth birthday, soon after her grandmother died. Shortly after Sandra joined the coven, Raven – the High Priestess, informed her rather ceremoniously that she had the gift. Raven also informed Marcie that she had the gift of prophecy and healing. Marcie wasn’t entirely sure how accurate Raven’s declarations were because, if she was totally honest, she’d never felt prophetic. Even her tarot readings were a little iffy at the best of times. She had difficulty telling when her own relationships were ending and she’d had a lot of relationships come to very surprising, at least to her, endings. She could never see the warning signs that everybody else could long before the inevitable breakup scene.

Most women were supposed to have some form of intuition, that’s why they called it feminine intuition, but Marcie didn’t even have that. All she had were weird dreams, which she didn’t remember the next morning. The healing thing, on the other hand, was something she could buy into. She was an ER nurse at Steve Biko hospital after all. Having Raven tell her that she had gifts, that she was special, even when there was no evidence to back it up, somehow made her feel better about herself. When everything else in her life made her feel inadequate and small, the coven made her feel like she belonged, that she was special.

‘You okay Marcie?’ Tarin asked as she put a hand on Marcie’s shoulder. Tarin was the empath in the group. ‘You don’t seem quite yourself.’

‘Really?’ Tarin raised an eyebrow. ‘Have you had a look through Raven’s library lately?’

Marcie shook her head, confused by the question.

‘She’s got some interesting new books, well actually they’re antiques but she just got them, so I guess that makes them new.’ She smiled. ‘Anyway, you might find what you’re looking for there,’ Tarin said with a wink and walked over to where the drumming circle started to form outside on the patio.

‘I don’t know what you’re talking about,’ Marcie said to Tarin’s back, but the seed of curiosity had been planted.

The library was down the unlit passage, through the kitchen and the archway on the left. It was a strange little room that seemed to have been added to the house on a whim by whoever had built it. It could have been a pantry in its former life, but Raven had decided to turn it into a library. Most people would find it strange to have a library off the kitchen, but it made perfect sense to the coven. The kitchen was where they brewed and cast most of their spells. The library was probably the smallest room in the house, but the most important one as far as Marcie and the rest of the coven were concerned. The room had that musky smell that only comes from antique books. One wall was dedicated to ancient texts. Some written in Latin and old English. Unfortunately, Raven was the only one who could read them, thanks to her Catholic education. It was always a puzzle for Marcie how a lot of lapsed Catholics found their way to Paganism. Perhaps it was the pageantry that could be found in both paths.

On another wall were more modern books by authors such as Carlos Castaneda, Silver Ravenwolf, DJ Conway, Donald Michael Kraig, and Scott Cunningham. There was even a copy of The Göetia translated by Samuel Liddell with an introduction by Aleister Crowley in the older books section. Marcie’s favourite one was Modern Magick by Donald Michael Kraig. The rituals within the pages had opened her up in ways she’d never imagined. She’d also ended up having a few interesting hallucinations, which had left her wondering if she’d gone completely off her rocker. Thankfully Raven had told her that she was now simply seeing things that most people were too closed-minded to see. It had given her a taste of what was possible but had also left her hungry for more knowledge, a deeper magical experience, and perhaps enough power for her spells to work. Just once she’d like to see, one of her spells come to fruition.

The books that Marcie was there to peruse were in a box in the middle of the room. Raven hadn’t had a chance to unpack them yet. None of the coven members knew how Raven managed to get her hands on such rare books, but each one of them was worth a fortune.

Raven had inherited some money when her husband had died five years ago before the coven had come together. None of them knew how much, they assumed that it was a considerable amount of cash. If Raven had inherited so much, Marcie couldn’t understand why she chose to live on a dilapidated farm in the middle of nowhere. The thought made Marcie shake her head as she fingered the spine of one of the books. If she’d inherited that much money, she’d probably have quit her job and bought a place right on the Cape Town beach front.

The first book’s leather cover was rough to the touch. She put the first book down on the floor, next to the box as she picked up the second volume. It was thicker and heavier and much older than the first. It vibrated in her hands. The shock of power that emanated from the book gave her a fright. She put the book down with respect and fear. It was a book she would not be reading – ever. There were certain things that she believed should not be dabbled with and whatever was inside those pages was definitely something she didn’t want to tangle with. The third book was thinner and not quite as old. It too seemed to vibrate with power but not at the same frequency. It didn’t scare her as much as the other one. It piqued her curiosity.

Sitting cross-legged in front of the box, Marcie paged through it, slowly devouring the pages with her eyes. The text was in Latin, but a previous owner had written the English translation under each line in cursive. The penmanship was beautiful and strong but faded from years of gathering dust. It was written in classic, old-fashioned English. She could imagine the person who’d done the translation living in Victorian England. The magic behind the words enticed her senses and hinted at the power behind each syllable.

‘You still alive in here?’ Raven asked as she popped her head around the door.

‘I think so,’ Marcie said still staring down at the open book in her lap.

‘Find something interesting?’ Raven walked into the room and looked over her shoulder.

‘Do you mind if I borrow this?’ Marcie asked.

‘Of course, you can. Just remember to keep a diary of your experiences and the rituals or spells you do.’

‘I promise to let you know all about it.’

‘Good. Now come outside and get some food before it’s all eaten. Those girls are ravenous.’

With difficulty, she tore herself away from the library and the treasures it held, the book firmly in her grasp. She’d be putting it to use before the night was over, she decided.

And here I am reading a short snippet on YouTube:

If you enjoyed it, you can download the ebook from all your favourite stores.

If you’ve read and enjoyed any of my books, please leave a review on Amazon and or Goodreads. Every review helps feed a starving author.

Remember to hit that subscribe button to keep up with all the news, reviews, interviews, and free short stories. Be A Freaky Darling!