Trick or treating has never been a South African tradition. It’s only been something we would see on American sitcoms like the Cosby show.

As a child I would watch happy little American children going off in a costume that a proud parent had put together with love or not, depending on the sitcom, and I’d think, ‘That looks like fun. Why can’t I do that?’ The response from my rather bemused mother would be a shrug and a ‘We’re not Americans.’

Now many years later it seems that a new generation of South Africans have decided that it doesn’t matter that we’re not Americans. It looks like fun and we’re doing it!

I live in a small gated community in Johannesburg and the body corporate who runs the complex got together and decided to organise the Trick or Treating for the kids in the community. A sign was put up at the gate asking all residents to have sweets available for the kids. We were also given a piece of string to tie on our gates, the let them know that it was in fact okay for them to knock on our doors and scream ‘Trick or Treat!’  All in all it was pretty well organised and the kids got to dress up and have the type of fun that I and many of my generation didn’t getto enjoy.

South Africa has come along way in the last few years. Only 6 years ago friends of mine were evicted for throwing a Halloween party. They were accused of being Satanists – Shocking, I know. Now we have Halloween parties in all the major night clubs and trick or treating in Suburbia. Yes, South Africa has certainly come a long way. 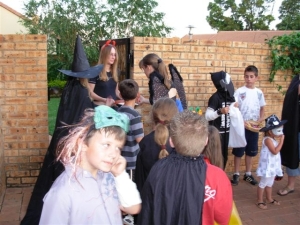 Handing out sweets to the kids