The first draft of Consequence is almost done, and then the editing begins, but I thought I’d give you a sneak peek so long of the unedited first chapter – just to wet your whistle.

And here’s your first look at the cover as well … 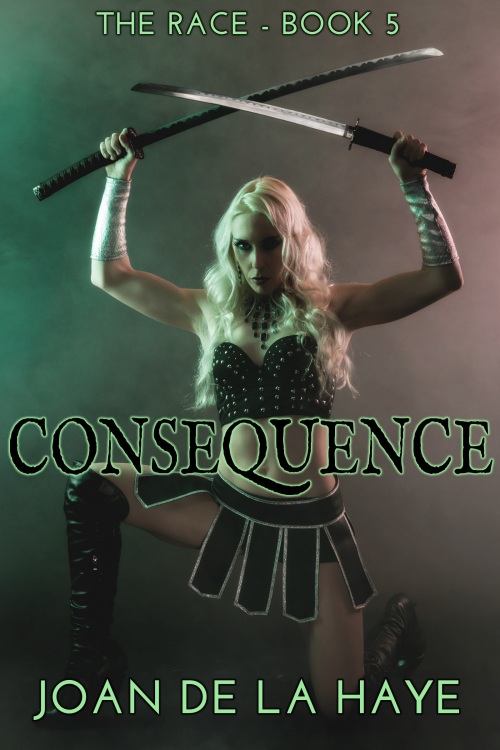 Our feet padded softly on the fallen pine needles as we ran through the forest. Sunil’s breathing was steady with no hint of exertion. Without realising it, I’d matched my breathing and running gait to his. We moved as one. The castle loomed above the trees and came closer with every step. The moment we reached it everything would change back to the routine our lives had fallen into since getting back from the Island. Elena and their daughter would be waiting for him, and I would wander the halls feeling like a lost fart waiting until our next sparring session or the next run. All I wanted was to keep running in the woods and ignore everyone and everything else, but that wasn’t an option. Reality waits for no woman.

Elena stood at the top of the stairs leading up to the fortress’s front door, holding her daughter’s hand. Every time Sunil and I went out for a run, she would be waiting for us with their daughter when we returned. Every fucking time. She barely let him out of her sight. It was only for our morning runs in the forest that I didn’t feel her watching our interactions. I kept expecting her to scratch my eyes out if I looked at Sunil the wrong way. Even while we were in the training room sparring, she would be watching us with their daughter practically tied around her waist. I mean, I get it, her daughter had been taken away from her at birth, and she was trying to reconnect with her child and build a relationship with the father of said child, but did she have to be quite so psycho about it?

Elena glared at me as I walked past and gave the kid’s hair a ruffle. She was a cute little thing. Luckily Catalina, the child, didn’t take after her mother. She was more like her father. Thank fuck for small mercies. I’m not sure if any of us could have survived two Elenas in the castle. It was bad enough that we had to take Elena is since Victoria’s demise. Von Zimmer had felt it was the right thing to do. There were times when I wanted to shake him and tell him to stop being so fucking decent. It was annoying.

“Ah,” Von Zimmer said as he emerged out of the shadows of the hallway and blinked into the morning sunlight. “We must talk.” I was surprised he was speaking to me, he’d pretty much ignored me since we got back from the Island.

I nodded and followed him inside, but made the mistake of glancing over my shoulder just in time to see Sunil pick his daughter up and kiss Elena. On the surface, they appeared to be the perfect happy family, but beneath the façade, I wondered if it was that idyllic. If they were the happy couple, Elena wouldn’t need to act like a jealous wife who thought her husband was cheating on her, especially since I knew beyond any doubt that he was completely faithful to her.

“So …” I said once inside Von Zimmer’s office. “Who’s blowing up whom now?”

“I have a coffee plantation in Ethiopia which is under threat, and my presence is required,” Von Zimmer said without any preamble. “I would ordinarily ask Sunil to accompany me, but given his current circumstances, I feel it would be best if he remained here. There are still many in The Organisation who feel that Elena should be punished for her actions, and they could attempt to forcibly remove her from the castle grounds. Sunil is therefore compromised.”

I nodded. I hadn’t really needed the explanation. I got it.

“Within the hour,” he said.

Consequence should be out by early June!

If you haven’t already grabbed your copy of The Race for free, you can get it at your favourite ebook store. The other books in the series are also available from all ebook stores for $0.99.

Well … That’s it for this week. Until next time …

If you haven’t already, be a Freaky Darling and hit that subscribe button to keep up with all the news, reviews, interviews, and video updates.