Today we have William Gorman in the interrogation seat. 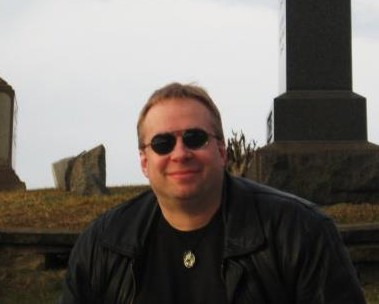 William Gorman grew up listening to ghost stories and dark fantastical yarns from his grandfather—a magician and former ‘mentalist’ during the last great, fading days of vaudeville. He’s had short fiction published in Nightmares, Thin Ice, Severed Tales, The Midnight Shambler, Nightside, and The Rockford Review. His first book, a collection of local myths and legends titled GHOST WHISPERS, came out in 2005 and spawned the highly popular Haunted Rockford tours and cemetery walks now operating in his Illinois hometown. His first novel, BLACKWATER VAL, was published in April of 2016.

He now lives in the Ohio Valley with his Lady of the Manor, Suzanne, and their German shepherd Gabby, and is currently hard at work on his next novel and a new collection of macabre tales.

I think it’s one of those things that either chooses you or it doesn’t. You don’t choose it. Writing isn’t glamorous. There’s no money or fame in it, except for a select lucky few. It’s a frustrating, antisocial thing . . . so why do it? I guess it’s just a need to tell a particular story that’s building up inside, a compulsion to get it out, so it can carry on afterward. I have to channel these creative energies of mine and give them an outlet in some way. For me, it’s all about leaving something behind that will be remembered. Telling a good story.

The imagery of it: vengeful ghosts and crumbling graveyards, unspeakable deeds. The ‘danger’ potential. In dark fiction there’s always something lurking just out of the light, something dangerous and oft times supernatural. I love that kind of stuff. Always have. I love creating worlds like that. It’s a way to reject the mundane reality around me and replace it with my own, I suppose.

My mom gave me collections by Poe and August Derleth when I was really young, so they’re right up there. Robert Howard wrote some great horror stories, as did Algernon Blackwood. Ray Bradbury and Michael McDowell always raised some goosebumps. And Robert Bloch. Then, discovering Stephen King in my teenage years opened up all kinds of different doors for me.

King’s early works, of course. Especially his so-called S books—’Salem’s Lot, The Shining, The Stand. I would say Herbert West and Charles Dexter Ward by Lovecraft, and The Elementals by Michael McDowell. Every summer I make a point to reread T.E.D. Klein’s The Ceremonies; it’s such an atmospheric, dread-filled experience. Boy’s Life and Swan Song by Robert McCammon are amazing, as is Clive Barker’s Weaveworld . . . it continues to be the perfect blend of fantasy and stark staring horror, in my opinion. And naturally Hill House by Shirley Jackson.

Paperback all the way. Ever since I was a kid, carrying paperbacks around with me everywhere.

The cover, foremost. If it has a killer cover that catches my eye, that’s a big plus—fortunately I had a great Ben Baldwin cover for my debut novel, Blackwater Val. An interesting title can do it also, something unique that grabs me. And subject matter that I’m really into. But the cover and title are the main things that hook me and reel me in, make me want to find out more. In the genres I enjoy, though, with some kind of supernatural element hopefully.

That’s a tough one. There are so many. I’d have to pick Sherlock Holmes, I guess. Such a complex, almost tragic character. A labyrinthine man. Not at all a gay character, as so many people mistakenly believe, but a brilliant sleuth whose mind happens to be so intellectually ‘above’ the idea of love or sexual lust that he never even considers actually ‘lowering’ himself to its levels. Fascinating character—married to his work, above all else.

I like to start out with a rough outline, just a general idea of where it’s all going. Then I let it wander wherever it wants. Occasionally the story has to be drawn back on course, if things stray too far off the outline’s path, but mostly it does what it wants to.

All the time. Absolutely. When you give them free rein, the characters will often surprise you. Take you in directions you never thought of. Great things can happen then, when both the writer and the reader are equally surprised.

Most of the time I prefer silence, but sometimes I’ll listen to different things to help set a certain mood. Various movie soundtracks are good, depending on the atmosphere I’m looking for.

My first book, Ghost Whispers, was a collection of local hauntings and spooky legends from my home town in Illinois. With that one, yes, there was a lot of research. Tramping through overgrown cemeteries, trying to find a particular headstone or epitaph. Sitting for hours if not days on end, tediously running down various leads and events in the Genealogy and History rooms of libraries. But with my novel it was minimal research, fun stuff like witchcraft, and fallen angels, snippets of foreign languages and customs. Most of the research was regarding the so-called Black Hawk War, the American Indian massacre of 1832.

Facebook. I’m not on Twitter yet. But then, I come from the old Myspace school of outdated social networks. It usually takes me a while to catch up with whatever’s trending.

13.  What really pisses you off about writing?

Losing so much time to the networking and self-promoting, time that could be spent actually writing. It’s the world we live in today, I understand that, but still. Also, this constant struggle to obtain reviews. You give out 30 or 40 free copies of your work to people, hard copy versions and electronic book versions, and you hear almost nothing back from them? I’m not talking about the paying public now, readers who purchase your book and are free to either review it or not review it as they so choose . . . hell, I’m guilty of that myself. But these are 30 or 40 individuals who expressly agree to read the books given to them gratis and to leave reviews on Amazon. Then you get maybe 3 or 4 reviews that trickle in over the next ten months, because the others can’t take two minutes and write the review they agreed to. I mean, what’s up with that? Seriously, let me go down to the bakery on the corner and stand around all day and eat 30 or 40 of their donuts, and afterward maybe I’ll pay up for 3 or 4 of them. Or instead I might just promise to stop a few strangers on my way home and maybe tell them about those delicious donuts at the corner bakery. Then I might not even do that. I know that’s not the best analogy, but you get the idea. Unbelievable! And now I’m hungry for donuts.

Remember to hit that subscribe button to keep up with all the news, reviews, and interviews. And feel free to leave a comment or three. It’s always nice to hear from you guys.