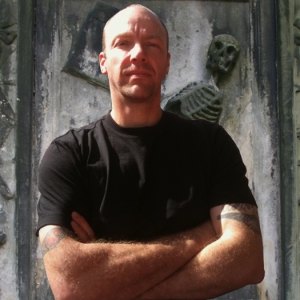 Today on 13 Questions we have author Alan Baxter. Alan Baxter is a Ditmar Award-nominated British-Australian author. He writes horror, dark fantasy and sci-fi, rides a motorcycle and loves his dog. He also teaches Kung Fu. He is the author of the dark fantasy thriller novels, RealmShift and MageSign, co-authored the short horror novel, Dark Rite, with David Wood, and has around 50 short stories published in a variety of journals and anthologies in Australia, the US, the UK and France, including the Year’s Best Australian Fantasy & Horror (twice – 2010 & 2012). In 2013, Alan won the Australian Horror Writers’ Association Short Story competition. Alan is represented by literary agent, Alex Adsett, of Alex Adsett Publishing Services. As well as fiction, Alan is a freelance writer, penning reviews, feature articles and opinion. He’s a contributing editor and co-founder at Thirteen O’Clock, Australian Dark Fiction News & Reviews, and co-hosts Thrillercast, a thriller and genre fiction podcast. He is director and Chief Instructor of the Illawarra Kung Fu Academy. Read extracts from his novels, a novella and short stories at his website – www.alanbaxteronline.com – or find him on Twitter @AlanBaxter and Facebook, and feel free to tell him what you think. About anything.

I don’t know. I have stories inside me that need to get out and I get really antsy when I don’t write. I’ve always been like this – I can’t remember a time when I didn’t have the urge to make shit up and write and it down. And I seriously think I would go batshit insane if I didn’t have some kind of outlet for this weirdness in my noggin.

I didn’t even realise I wrote horror until people told me and my books started to get classified that way. I’ve always written speculative fiction, with monsters and magic and gods and demons and I’ve always been drawn to the darker end of the spectrum. I’ll always follow a story all the way down the rabbit hole and it’s dark down there. Unless someone turns on a light, and seriously, who the fuck has a light installed in a rabbit hole?

I think that when we don’t try to avoid the darkness we end up with a more authentic and complete story than we otherwise would. All spec fic lets us explore the entirety of the human condition and horror is the ultimate expression of that for me.

That’s a tough call. There are so many writers who inspire me. To rattle off a few off the top of my head: Stephen King, Kaaron Warren, Angela Slatter, Clive Barker, Alan Moore, H P Lovecraft, Edgar Allen Poe, Paul Haines, Robert Hood, Richard Matheson, Garth Ennis… man, I could go on and on! 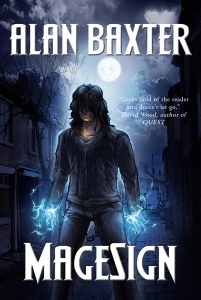 Other than mine? Seriously, though, The Exorcist by William Peter Blatty, It by Stephen King, Cabal by Clive Barker, everything by H P Lovecraft and E A Poe, I Am Legend by Richard Matheson. Again, I could just go on and on!

Both. I devour both with equal vigour. Don’t mistake the plate for the food – the story is the thing, however that gets to you. We are definitely heading into a world where the vast majority of literature will be digital, but there will always be print books. POD technology means print versions can always be made available, and the artefact of the limited edition, beautiful hardback will only gain more popularity.

More than anything else a recommendation from a friend whose opinion I already trust. Beyond that, good reviews, tips online, a snappy cover, a strange whim. Nothing particular makes me try out new things, but a recommendation will always work. Word of mouth has always been and always will be the greatest seller of books.

Batman. And the Joker. I think Batman is the greatest creation in fiction and when he’s up against the Joker, he’s at his best. I’m a huge comics fan and the graphic novels I’ve loved greatly inform and inspire my work. For the ultimate Batman/Joker story, read The Killing Joke by Alan Moore and Brian Bolland.

A bit of both. I’m mostly a seat of the pants writer, but I always plan a little bit. But those plans are always subject to change if the story takes me in a direction I didn’t expect. The organic process of writing is too much fun to be shackled with strict plans. When I sit back from a writing session and say, “Well, fuck, I wasn’t expecting that!” I know it’s been a good session. And I know the story is being true to itself. Sometimes I just feel like a meat puppet at the keyboard, only there because the story doesn’t have its own fingers to type with.

All the time! See above. That’s the beauty of characters – they reveal your subconscious to you through their actions. And that can be cathartic or, sometimes, a little bit disturbing. 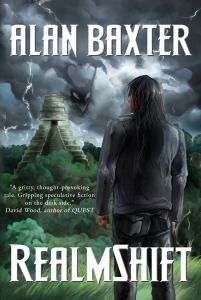 I always listen to music, but nothing with clear lyrics, as that’s distracting. I’m a big fan of heavy metal, so play a lot of that while I’m writing, plus a lot of movie and videogame soundtracks.

Yes, and it’s one of the things I love most about writing fiction. I really enjoy the process of research, of learning, and regularly use a story as an excuse to research something I’m interested in.

Both, for different reasons. I couldn’t pick just one, I don’t think. I’m a social media whore and spend loads of time tweeting and Facebooking and blogging. But I really enjoy it, so it’s never something I do consciously to promote my work or anything like that. If anything, I often forget to promote my work because I’m having fun, but I think that’s the right approach to social media anyway.

Rejection. But that’s something we all face all the time and it only makes me work harder, try harder and get better!

2 thoughts on “13 Questions with Alan Baxter”