I recently got a copy of The Red Stone by Craig Smith, a fantasy novel. Craig is a fellow South African writer whose book is available internationally.I must admit I’m not a big fantasy reader, but I am looking forward to reading this one.

Here’s the blurb etc for The Red Stone: 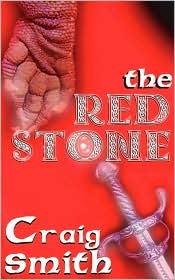 Tennen’s life had been rather uneventful under the servitude of Freil the tavern keeper. The tavern was his life and he didn’t know of or remember of much else. All this was changed when he was visited by a mysterious crow and given a rather remarkable red gem. From that very moment his life was thrust into a new direction. It was a new path of adventure, excitement, new joy, danger and deathly peril. Very much different to his mundane life of before. And before very long Tennen was thrown into the conflict between Count Errgol and his unending desire to take over Elfwood, and its unrivalled wealth of resources.

Tennen doubted if he would be of much use in such a thing as a full out war. He was just a tavern boy, but his attitude soon changed as he started to be trained by Rimotar a wizard of Melin. Tennen was very unskilled and had a lot to learn from the second highest ranked wizard in the whole of Melin. On their way towards the city of Ramchester the capital of Melin they meet up with Lady Loreria the ambassador of Elfwood. She has been sent by the king of Elfwood to get as much support as she can from Melin. It was a war that threatened to overflow into Melin if it was not stopped quickly. Tennen wasn’t too sure how he was going to be able to help, but this didn’t matter to him, Melin was his country too and he wasn’t going to let it be attacked. Tennen wasn’t sure if he could survive a war but he did know that his life would never be the same again.

You can get your copy of The Red Stone on Amazon and  you can find out more about Craig and his writing on his blog.

Have you read it? What did you think?