The last time I wrote here, it was only day two of the lockdown in South Africa. It’s now day twenty-something. Sometimes it feels like we’re all losing our minds. We’re all stuck in our own personal prisons, some are more comfortable than others. We’re also all developing our own ways of coping. I’ve noticed the different things some of my neighbours are doing. I’ve also listened to the things my friends and family are trying. Then there are the things that I’m trying. It all boils down to the fact that we’re all just trying to maintain some measure of control in a crazy and out of control world.

One of my neighbours hasn’t stopped cleaning since we went into lockdown. I can hear her vacuum cleaner going every day. Freshly washed laundry decorates her balcony day in and day out. Another neighbour hasn’t stopped working out. She does her hectic workouts on her balcony all day. Her dedication to getting fit during this time is truly something to marvel at, although I get exhausted just watching her while I eat my lunch or drink my coffee on my balcony. Many of my friends and colleagues at the day job have taken to baking bread. I have to say their efforts look delicious. It’s just rather sad that I don’t get to taste the finished product.

So … what have I been doing to stay sane? Well … I’ve tried the exercise thing. I tried doing yoga every morning before I have to sign in for the day job, but the last week or so has been a bit of a loss. My cats have been far more demanding on the morning snuggles front and to be honest, I’d rather snuggle in bed with my cats a little longer in the morning. I’ve also tried being handy. Our president suggested that instead of buying surgical masks (which are hard to get anyway and are actually meant for people working on the frontlines) we should make our own cloth ones. He also suggested that whenever we go out, we should be wearing masks. So I actually made three masks of my own. They might not be the most beautiful masks, but they will do the job and are completely washable. 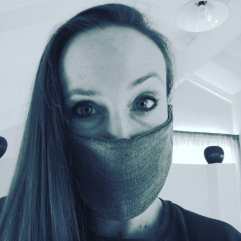 What are you doing to cope? Have you made your own masks?

Moving on to the next episode of The Veil. If you’ve missed any of the previous chapters, you can pop on over here.

Michael couldn’t watch. Scorpions freaked him out. Carol’s screams had gone from loud, eardrum-splitting screeches, to low, guttural grunts. He couldn’t decide which was worse.  Her body did a weird jerk, almost a bounce or a shiver, whenever one of the scorpions stung her.

“You see that?” Jack asked, pointing a triumphant finger down at Carol. “Every time one of them stings her, she feels a soul death. It’s an excruciating pain, and utter hopelessness, all rolled into one little sting. It’s perfect in its simplicity.”

“So, Jack?” Sarah said, with a strange vacant look on her face. She looked almost peaceful, which was impossible with Carol’s screams echoing around the room. “Which movie did you steal the idea from?”

“One of the James Bond movies. You know – the one with Pierce Brosnan. Madonna sang some crappy song for it. You know the one I’m talking about, right? With the scorpions in the beginning? Well, I’ve put my own spin on it.”

“That’s not very original of you,” Sarah said, without any emotion.

“You try being original after a few hundred years in this business,” Jack said, as he crossed his arms over his chest.

“I didn’t know demons watched movies,” Michael said, looking from Sarah to Jack and back again.

“I can’t say what other demons do, but I love movies. Can’t get enough of them.” A smile spread across Jack’s face. “Remember when we went to watch that movie together?”

“That’s not exactly how I would put it, but anyway,” Sarah replied.

“That was such a fun date. We really should do it again sometime.”

“Yes, I had so much fun watching you eat Gina’s popcorn.”

“Do I detect a note of sarcasm?”

“Damn,” Jack said. “Look what you made me do. I forgot all about our little Carol. I’m going to have to start from scratch.”

“Well, you know what you have to do to make it stop. All you have to do is put that gun of yours to your temple and pull the trigger. Then everything will be over. Go on. Just say you want it to end.” Jack smiled. It was almost sincere.

“You’re lying,” Carol whispered so softly that Michael had to lean forward to hear her. “This will never stop. You’ll keep doing this to me. Just like you do to Kevin and Uncle Martin.”

“Your uncle Martin was damned. I had nothing to do with it. Besides, he’s a willing participant in our games.”

“I don’t believe you,” Carol said through her tears.

“Well, my dear, that is your problem,” Jack said with a sigh. “Shall we continue?”

Michael’s stomach twisted as Jack’s latest game unfolded. A carving knife appeared in his hand and Carol’s screams once again reverberated through the cabin.

So … what did you think? Are you enjoying The Veil? Should I keep posting these episodes?

If you haven’t already done so and would like to have every episode delivered directly to your inbox, please hit the subscribe button.