Today we have a guest post by fellow Fox Spirit author, Alasdair Stuart. Alasdair is a freelance writer and journalist based in the UK. He writes genre fiction journalism for them, hosts podcasts for EA and blogs about making whoopee pies (Amongst other things) at www.alasdairstuart.com. He can be found on twitter at @AlasdairStuart.

Here’s what Mr. Stuart has to say:

I used to be a comic retailer. Not a seller of comedians, those are called agents and they get 10%. I got staff discount (WAY more than 10 percent! In your FACE, Ari from Entourage!) and a free education in contemporary western comics. It was a good deal, and it taught me three things;

1-The comics industry is always about to end. Seriously. I read message boards (And don’t they just sound quaint now?) at the time which posted a weekly summation of Marvel’s stock price. It was always falling. So was the sky. Both of them in fact were falling when I left the job. The store’s still there. So’s the comic industry. The sky? Well that’s debatable.

2-It is entirely possible to have a conversation with someone without ever actually doing anything other than monosyllabically acknowledging that you haven’t died. This is why I once spent an afternoon tidying the store whilst a gentleman spent three hours cheerfully explaining that Superman was a bit like Jesus.

3-Everything is always someone’s first issue.

That last one is both the most important and bares some explanation. Comics are an eternal bus route, there will always be another issue along in a month. Many of them assume basic knowledge of the characters involved, many more assume intricate knowledge. This is a bad thing. It means the comic corrals an audience in place, constantly playing to the same beats, the same crowd, the same audience secure only in the knowledge they will dwindle and fade. For some this is a good thing, after all nothing sells like an issue 1 relaunch of an old title. For others it’s the last stop on the way to cancellation.

The best titles are the ones that don’t do this. There are a bunch of ways to avoid it; run a series of mini-series like Hellboy or run a mini-series as a pilot episode for an ongoing like Haunted. Thief of Thieves has a particularly smart way of keeping things fresh where each storyline functions as an ‘episode’ and features a new writer each time, all of whom work from a pre-written story bible. All these techniques keep the book sharp and fun and accessable. All these techniques also ensure that every issue is either a first issue or gives you enough information to treat it like one. At the absolute worst, books structured like this may not let you jump on straight away but will let you know when you can. Accessibility is the key to an audience and an audience is the key to you getting to finish your story. The lesson, for me, was simple; always make sure what you do is accessible. Never assume knowledge of either internal detail or actual project.

That brings me to Escape Artists because it strikes me there’s no guarantee you’ve actually heard of them. Not the type of magician (One of the guys in my troupe did escape artistry. Until the night where he got a boy scout on stage to tie the knots in a sack escape. Then he did card tricks for a while.) but the company. Escape Artists Incorporated produces three podcasts;

-Escape Pod (www.escapepod.org) is a science fiction podcast. Every week it runs an SF story, normally round 30-45 minutes long. Asimov, Clarke and Heinlein have all made appearances but the show’s lifeblood is new authors like Aliette de Bodard, Alex Wilson and Ken Liu.

-Pseudopod (www.pseudopod.org) is a horror fiction podcast. It tends to run a little longer, at 30-55 minutes. Again, the greats have all hit 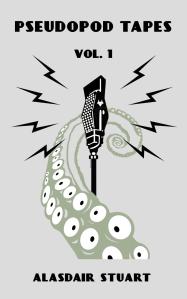 there including Thomas Ligotti (Due on episode 350), Christine Brooke-Rose and Rudyard Kipling. Again though, the show focuses on new authors like Vylar Kaftan and David Tallerman.

-Podcastle (www.podcastle.org) is a fantasy fiction podcast. Podcastle’s length range is huge. They’ve run flash one week and a Podcastle Giant (Over an hour) the next. They, again, have done the classics like Robert E.Howard and, again, specialize in new authors like Lavie Tidhar, Wendy Wagner and Zen Cho.

Every single episode is free. Every single one. Every single author, despite this, is paid (Well aside from Kipling. We’ve emailed and emailed but he’s just not sending us his PayPal details…). We do this because we rely entirely on donations to cover every single one of our costs and, and this is the kicker, we release everything under a Creative Commons license. Every file is always free to download and distribute yourself, as long as you make sure the original author is always credited and you don’t try and sell it or pass it off as your own work.

I say we because I’ve hosted Pseudopod for six years and I’m seven months into co-hosting Escape Pod. It’s my favourite ever job and, like I say, I used to run a comic shop and be paid to read and tell other people how great what I’d just read was. On the podcasts I get to do something similar, talking about the stories, what they meant to me and what they evoked. I get, literally, to sit in front of a microphone and talk and, as you can tell by this article, I do like to talk.

Even better, I get to do what two of my role-models did. Growing up, I was very fond of two TV shows; Midnight Caller and Northern Exposure. The first featured Gary Cole, King of the Character Actors, as Jack Killian an ex-cop turned latenight talk show host. The second featured John Corbett as Chris Stevens, the DJ in a small Alaskan town filled with glorious eccentricities and a near continuous awareness of the fourth wall. Those two shows, and those two characters, got me through some very rough patches. I learnt that if I was articulate and open and interested in everything then I could communicate that interest to others and, sometimes, make their lives better.

I could, in other words, be someone’s first issue-style window into a story I loved.

Plus I totally pretend to solve crimes and build trebuchets. Or, in this case, to point you at close to a 1000 wonderful stories you may have missed, all available for free. Even better, if you’re an author? Submit. All three podcasts pay. Check the submissions guideline pages below for details:

Nearly a thousand stories, each free, from some of the best authors in the history of their respective genres. As first issues go, you don’t get much better than that.

You can get your copy of The Pseudopod Tapes from Amazon!